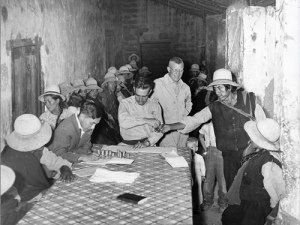 The field of anthropology has its beginnings firmly established in late 19th and early 20th century British colonialism, which, up through the 1930s, hired anthropologists to study the exotic and colonized peoples of Africa. However, the end of WWII and the collapse of the British Empire in Africa, Asia and the Caribbean brought about an increase in the application of anthropology to social problems during the early years of the Cold War. In the United States, anthropology had a similar start to British colonial anthropology with its government-sponsored work on Native American reservations. In 1941, the Society for Applied Anthropology was established with the goal of advancing practice. At this time, applied anthropology as a “sub-discipline” was marginalized by theory-focused academics, but throughout the next few decades it would find increasing prospects in an increasingly globalizing world. The applied models of anthropologists such as Alan Holmberg, Sol Tax and Ward Goodenough proliferated during a time in which anthropology became more critical of the prevailing political economic system and began to see its place as value-added in trying to understand the struggles of marginalized peoples at home and abroad.

Jaded by colonialism, imperialism and war, some anthropologists began to question the value-neutral stance of anthropology. Was it really an apolitical science of humankind, or did it have something more to say about and do for subjugated peoples? What was its role, and was it obligated to help those it studied? Moving away from traditional ethnographic studies that led to advancements in theory, anthropologists re-focused their efforts on practical social problems experienced on a global scale, including hunger, poverty, discrimination, health and labor movements. The theories and methods that had been previously used to study the life ways of the Other were now being used to understand the impact of globalization on communities and cultures, as well as the modernization initiatives of nation states to bring so-called primitive and traditional peoples to the 20th century. At the same time that anthropologists began to ask these questions, their presence was increasingly questioned by the people they studied. These developments led to a paradigm shift in practice and innovations in intervention models, as evidenced by the research and development approach of Holmberg, the action or advocacy anthropology approach of Tax, and the community development model of Goodenough.

In 1952, Allan Holmberg began the Vicos Project in the mountain city of Vicos, Peru. This early intervention model in research and development was undertaken with Holmberg’s western-centric assumption that all human beings everywhere subscribe to the same set of universal values, including power, wealth, enlightenment, respect, well-being, skill, affection and rectitude. Holmberg believed that the enhancement of these values in the community would bring economic and social prosperity to the Vicosinos, who had been subjugated as peasant laborers under a plantation-style encomienda system since Spanish colonial times. Holmberg and his team, which included Mario Vasquez, a Peruvian anthropologist, purchased the hacienda and became temporary patrones in order to begin their project, which would include the introduction and application of modern agricultural technology and a focus on land ownership, labor and human rights, political organization, education and health initiatives, and economic development. Although there were measurable outcomes in these areas and the project was participatory within the given historical context, Holmberg’s project has been criticized for its paternalistic notions and the team’s attempt to change or modernize the Vicosinos. Aside from these pitfalls, it was an innovative approach in the practical application of anthropology that would affect the discipline in a huge way in years to come.

A second pioneering approach was Sol Tax’s Fox Project, which also sought to improve the lives of a group that had been forced to live within the confines of a reservation by the United States government, which disempowered and subjugated them through years of anti-Native American legislation that appropriated their lands and resources. This advocacy project sought to look at the relationship between the Fox and their white neighbors, and unlike Holmberg’s project at Vicos, it did not seek to impose western values. Rather, it attempted to understand the “felt needs” of the community, which the Fox determined to be the preservation of their culture and life ways in the face of what the whites saw as their eventual assimilation into mainstream American society. Essentially, the whites viewed the Fox as lazy and unwilling to work; they were a drain on tax dollars and government resources. This misconception was understood by Tax and his team as rooted in the white’s ignorance of the effects of structural violence on Native Americans throughout history. This project was also much more participatory in nature; although Holmberg and his team considered their project participatory because they worked with the Vicosinos to a degree, the anthropologists running the Fox Project actually encouraged members of the Fox to take on roles as co-researchers.

A third model of intervention came in the form of an alternative approach discussed in Goodenough’s book Cooperation in Change: An Anthropological Approach to Community Development. Goodenough found that a cooperative or participatory model was more beneficial for effecting change in the lives of marginalized folks who usually have no input. Anthropologist John Van Willigen also notes the importance of inclusivity in research in every part of the research process, from defining project goals to collecting and analyzing data. In this respect, communities are able to take more ownership, decrease the risk of dependency, and increase the prospect for the sustainability of the project in the future. The community development approach is the most emphatic of stakeholder participation than any of the models presented here. In this approach, as noted by Kretzman and McKnight and Van Willigen, community assets (knowledge, associations, individuals institutions) strengthen community organization and research projects, rather than forcing stakeholders to rely solely on the “expertise” and assumptions of “expert” researchers.

Although applied anthropology has come a long way in its creation and critiques of various approaches to development, many organizations (such as USAID, WHO, and the World Bank) currently carrying out well-intentioned projects in both the United States and abroad continue to use the modernization theory model of development that seeks to transform communities in the hopes of saving them from the despair of poverty without considering the political and cultural implications of their actions. However, many organizations are also coming to realize the short- and long-term benefits of more egalitarian and participatory approaches to improving the lives of the millions of unfortunate victims of globalization, capitalism, and so-called social progress.

Holmberg, Tax, Goodenough, Hyland, Van Willigen, Kretzman, McKnight, and many other anthropologists have been able to effect change in communities through participatory efforts (including research and development, engaged scholarship, community building and action/advocacy anthropology) by emphasizing the importance of community input and assets, the importance of place and culture, the use of incremental and reflexive planning (Wim Wiewel) and the democratization of the discipline. Participatory projects continue to take precedence with applied anthropology departments at the lead, including the University of Memphis’s own Department of Anthropology and the School of Urban Affairs and Public Policy, led by Dr. Stan Hyland, an anthropologist and one of my advisors from grad school. Hopefully the ideas of participation, reflexivity, and advocacy in research will spread as social inequities and injustices continue to proliferate in the globalized 21st century world.