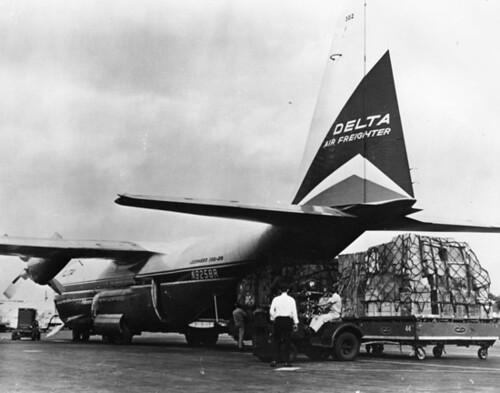 Lockheed L-100 Hercules via San Diego Air and Space Museum Archives
On trip to D.C. last week, I sat next to an older gentleman who I’ll refer to as M. He and I had a very nice conversation that lasted most of the flight, chatting about our professions, what we studied in school, and small talk. I quickly learned that M. just so happened to be a senior pilot for Delta, so I took the opportunity to ask him some probably rather uncommon questions about the airline industry, flying, customer experiences, etc. You know, the typical stuff that comes out of the mouths of curious researchers. (Later, when I revealed to him that I do consumer research for a living, he said he wasn’t surprised given the types of questions I posed.)
M. has been a pilot with Delta for 22 years and was heading to a conference about aviation safety. I won’t relive the entire conversation here, partially because I can’t remember most of it. But I do want to share a few points that I wrote down field notes-style during a pause in our discussion. I think they are worth noting because they changed my perceptions and expectations around the potential for the customer experience when flying Delta, with which I have been known to be frustrated. Oh, what a little bit of perspective can do… funny how even researchers forget this sometimes.

On the flip-side:
Still…
Before finding out that I do consumer research, M. actually took the time to ask my opinion about some of the issues at hand. Of course, I had no shortage of responses; I tried to be honest, yet my goal was also to listen to his perspective on things in order to have a better, more informed and broader opinion about the subject. M. also happened to have a MBA, so our discussion about the customer experience and marketing strategies (after I revealed my hidden identity) was an enlightening one.
I enjoyed getting the perspective of someone who deals with Delta’s logistics and inner-workings on a regular, first-hand basis. It got me thinking about things I had not considered in the past during all of my griping reflections on my recent Delta experiences. I appreciated M.’s honesty about how he thinks Delta can continue to improve the customer experience, but also that he defended his company and the good things it tries to do. It takes a lot of guts for a company to admit fault, but it’s a whole new ball game when it’s willing to alleviate the stresses and frustrations of customers that are caused by something that’s not even its fault to begin with. I still feel that there are no excuses for some of the things I’ve seen and experienced while flying (overbooked flights, regional outsourcing, etc.), but from now on I’ll continue to try and be more open-minded when it comes to my expectations for flying with Delta, and possibly other carriers as well.