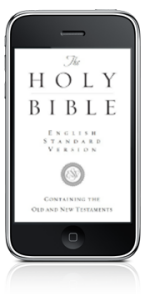 Last Sunday I was invited to attend services at a local church here in Memphis. I got to know the pastor during an internship project I worked on, which looked at the role of small, grassroots churches in community health outcomes. I spent numerous hours conducting participant observation at the church and interviewing members and staff.

I am not a church person, but the two-and-a-half hour service was quite enjoyable, first and foremost because the pastor is an excellent preacher who kept my attention with his speaking and story-telling abilities. And the music was good. Naturally, I had my participant observer hat on and paid close attention to the context and social interactions around me. One thing that really struck me was how various forms of technology had been integrated to enhance the church-going experience.

I haven’t attended a religious service in years, so this may not be new or very interesting to those who are regulars. When I was a kid, my mom made me go to church, and I don’t recall anything technological or modern about it. Here, however, the entire service was projected live on a giant screen above the altar (along with an excellent sound system.) DVD recordings of the service were available for purchase immediately afterward at the “Media Booth”. Multiple videographers captured the scene and biblical verses and images were superimposed onto the screen above. It’s an obvious part of the church’s business model.

Most interesting to me were several people looking at a Bible app on their phones. When it was time, they would navigate to the section the pastor was referencing. There were no physical Bibles to be seen, and only a few people brought their own. I think the older folks who didn’t have phones brought their own personal Bibles. At the end of the service, the pastor announced that members could now pay their tithes/offerings online. The pastor has 5,000 friends on Facebook, which he showed me on his iPhone when I saw him at the farmer’s market the day before the service. He uses Facebook regularly to keep in touch with members and discuss theological/philosophical questions. He also mentioned something about wanting to introduce me to his son, who was looking for a wife. That’s a story for another time.

There are obvious conveniences afforded by using different technologies in this space. Religious institutions may more easily communicate with people, drive donations, and increase engagement. I look forward to checking out church tech when I attend my next service in around 10 years from now.