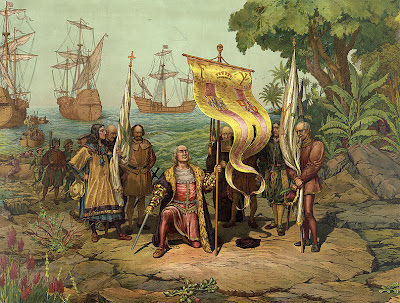 “Social studies is the neglected subject in school these days. Not enough time in the day.” – My dad, a second grade teacher in Pinellas County, FL

This statement is a very true and very sad one. Thanks to budget cuts, and, according to my dad, more time scheduled for standardized test-related subjects during the school day (two hours per day just for reading, one for math), social studies (including history, government, economics, map skills, etc.) as a subject has been forced to take a seat on the back burner in public schools. Not that math and reading are unimportant by any means, and there are other subjects who’ve gotten the shaft even worse, like the arts and music (my dad says that his students only get 40 minutes per week total for these two!). I would argue, however, that social studies are just as crucial for kids growing up on today’s globalized earth. Studies in this subject area can provide great benefits to critical thinking skills and a broader, more well-informed understanding of the greater world.

When I was a kid, the social studies curricula I learned at school was, for the most part, probably pretty standard fare for a public school system. But I learned about some of the information I think it takes to be a decent citizen of the world: basic things about the history of my home state (Florida), Native Americans of the region, fundamental concepts around macro- and microeconomics, U.S. geography, American government, U.S. history (including timeline stops at the Civil War, Prohibition, the Civil Rights movement, Vietnam, etc.), and World History (with a disproportionate focus on Europe and the so-called “Age of Enlightenment”).

I give much credit to my social studies teachers, who actually gave a darn about what they were teaching and about kids learning things rather than just memorizing names and dates (there was a bit of that). For the most part, they made it interesting, which I appreciated because I have always loved the subject area, especially world history. I recall spending a good amount of time understanding the events, people, human experiences and histories of various social studies subject areas; when I was in middle and high school, I remember talking about the implications of historical lessons for the present day, and using problem solving skills to understand situations we might encounter in the real world. Content-wise, I learned a lot. I recall extended units on the Holocaust in more than one of my classes, units on Medieval European history, class discussions about the conflict in Bosnia and Herzegovina in the early 1990s, and debates about the OJ Simpson trial (the latter was not a major world event, but it was a national one with great political and cultural implications characterized by a divided public opinion that I observed even amongst my fellow 4th grade students).

Indeed, I learned quite a bit, and am thankful for the education that gave me the skills and worldview I have today. However, it wasn’t perfect, especially when it came to presenting “alternative” viewpoints. For example, when we did units on World History, there was always a big emphasis on the European explorers and pilgrims, who we were taught to thank for their “discovery” of America and all the “great” stuff they did for our young country (like destroying the lives of the people who already lived here). The stories of Columbus and the other great European explorers were always presented in a very positive light. We were taught to think of them as folk-heroes because they made long and arduous journeys from their homelands to America, planting the seeds upon their arrival of the independence and patriotism that make up our nation’s cultural and historical narrative. We never learned about any of the stuff you will find in, say, Howard Zinn’s acclaimed book, A People’s History of the United States (e.g. how the Europeans spread disease, stole land and resources, enslaved the natives and forced them to adopt Catholicism, propagated a greed-driven cultural genocide, etc.) Without a doubt, this book should be on every high school kid’s summer reading list, and should be re-examined again (maybe even twice) as required reading in college.

As kids, we celebrated Columbus Day without a second thought, grateful for the day off from school. With our paper headdresses and hand-traced turkeys, we took part in plays for our families about the first Thanksgiving between the pilgrims and the Indians. We reenacted that famous scene in which the Indians graciously shared their foodstuffs with the starving pilgrims, and everyone lived happily ever after (except for the Indians, but we didn’t really focus on that too much in our studies). All the while, we were being enculturated with the values of sharing and caring through our reenactment of this celebrated day. 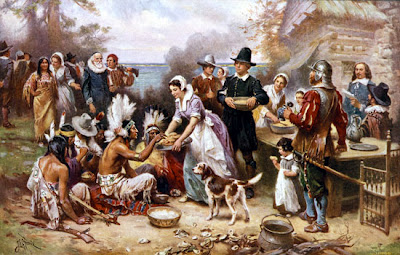 The First Thanksgiving, 1621, by J.L.G. Ferris via Encyclopaedia Britannica

I imagine that what students learn about the world and its history has a lot to do with where they go to school (geographically) and who teaches them (the academic training and background of teachers, the political or religious slant of the school, etc.) I say this because for some reason, the subject of Christopher Columbus, came up in a conversation I had the other day with my boyfriend about a song he learned about the famous explorer when he was in third grade. He went to school in Oakland, California, at a teachers college that was known for its liberal/alternative leanings. I was surprised when he described the song to me, because the story it tells is so different than what I learned throughout my K-12 education. Let’s have a look at the lyrics:

In fourteen hundred and ninety-two
Columbus sailed the ocean blue.
It was a courageous thing to do,
But someone was already here.

The Inuit, the Cherokee, the Aztec and Menominee,
Onondaga and the Cree…
Columbus sailed across the sea
But someone was already here.

Columbus knew the world was round
So he looked for the East while westward bound
But he didn’t find what he thought he found
For someone was already here.

It isn’t like ‘twas empty space
The Caribs met him face to face
Could anyone discover the place
When someone was already here?

So tell me who discovered what-
Thought he was in a different spot
Columbus was lost, the Caribs were not
They were already here.

There are at least two great things about this little jingle. First, it actually questions the grand narrative most commonly presented by teachers across the nation about the discovery of America (or at least that’s how it was when I was in school). Instead of focusing on how awesome Columbus was for discovering new lands in the name of the greatness of Europe, it makes a point of emphasizing that there were actually already people living here. What a novel idea. And second, it wasn’t just one homogenous group of people called “Native Americans” or “Indians”, but a whole bunch of different people (seven are mentioned here). As a side note, the year my boyfriend learned this song (1992) happened to be the same year that next door neighbor Berkeley renamed Columbus Day “Indigenous Peoples’ Day”.

I often think about how different our society would be if students were afforded more time to learn about the past and present as history. Instead of spending inordinate amounts of time being drilled with math formulas and vocabulary words, what if they were taught to value the stories and cultures of other people, and to think critically about world events? This might sound radical to some, but what if in learning about these things, the information they were taught didn’t just represent one side of the story? There are probably many students out there who benefit from such an educational perspective, but it doesn’t seem to be a major component of teaching/learning in public schools today.

And it doesn’t have to start in high school. A lot of these topics might be more appropriate for middle school and high school than elementary school, but I feel that the latter is a crucial time during which children are really impressionable and during which it makes sense to teach them about some of the alternative viewpoints on history that aren’t usually highlighted by run-of-the-mill public school classes. Kids can learn from the lessons of the past and the present from a much earlier age. I’m not suggesting we teach kindergarteners about the horrible cruelties of the European explorers in detail, but surely they would benefit from something more high-level, like talking about why it might be wrong to impose one’s beliefs on someone else, and the importance of respecting people who are different from oneself.