Organizational culture is a topic that is near and dear to my heart. At last week’s Society for Applied Anthropology conference in Portland, I was among a group of five practicing anthropologists who participated in a session entitled “Codifying Corporate Culture”. The other panelists were Angela Ramer (HKS Architects), Kevin Newton (LinkedIn), Logan McLaughlin (McLaughlin Ethnography), and Shane Pahl (ABCO Refrigeration Supply Co.). We shared our experiences with organizational culture, change management, change facilitation and emerging consumer markets, with a focus on the challenges of defining, measuring and changing corporate culture as researchers, employees and professional participant-observers.

For the first part of the session, we each gave a pecha kucha-style presentation (20 slides, 20 seconds each) to quickly introduce our perspectives on and experiences with corporate culture. I opted to tell the story of one of my previous jobs (won’t mention the name, but if you know me, you know which one I’m talking about) with a set of customized memes I created on Imgflip.com. It was really fun (and challenging!) to come up with the right content (visual and text), and it was a new method of sharing information that I had never tried before.

I also became obsessed with knowyourmeme.com, the most authoritative source there is on the history and meaning of memes. Special thanks to Logan and my friend Isaac Sachs for reviewing my meme quality and suggesting revisions.

Here are the 20 memes with my speaker notes. 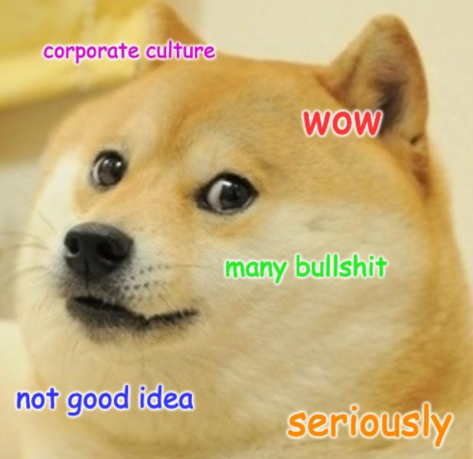 All of us work within cultures. But what do you do when the culture code is bullshit? One option is to just do your job. The other option is to challenge it and try to improve it. In my jobs, I have leaned toward challenging organizational culture because the problems are apparent, and because bullshit isn’t good for anyone.

Our training gives us a superpower that no one else has. We see the world through the lens of culture. We know where to look, how to understand it, and how to improve it. For us, it’s just not an abstract concept but something tangible. But challenging or accepting culture is a personal choice. Personally I believe that I am obligated to challenge it because of my superpower.

I have seen bad workplace culture negatively affect employees in all of my jobs. It impacts morale, and gets in the way of people feeling good about their work, doing their jobs with efficiency and quality, and feeling valued. And when things are dysfunctional, this can have a radiating impact, wherein the people using the product you are building are also affected.

As a design researcher, my job is to help companies understand people so the products they build are more valuable and useful. I advocate for what I think is right based on my understanding of people and their lives. I take a similar approach with my colleagues. I listen, understand, empathize, interpret and recommend solutions. I fight tooth and nail even when it’s uncomfortable for others.

What’s interesting about this dual approach is working within a culture, while also trying to change it. This is uncomfortable for people because you are asking them to get outside of their comfort zone and challenge how they do things. To be successful with this, you have to understand the culture that surrounds you – how things get done, how to communicate, and who has the power.

In organizations, there is a stated culture – what the company says it is – and the actual culture, which is people’s lived experiences of it. These may look very different from one another if there is a disconnect between the culture-dictators at the top, and everyone else. It’s just like the disconnect that can be found between companies designing products, and the people who use them.

Actions are louder than words. For example, a company might say that the customer is important and that business decisions should be made with the customer in mind. Yet that same company may actually ignore those people and exclude them from the process. It becomes OK for employees to ignore humans and focus only on metrics and big data to achieve quarterly goals. 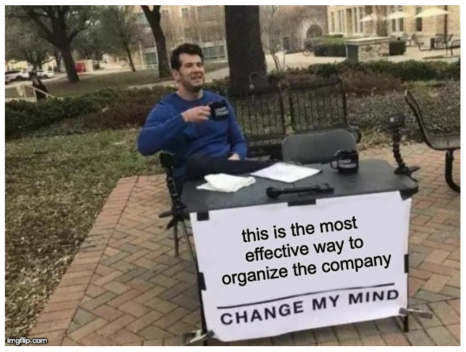 Another example of stated versus actual culture is how the company is organized, and how people are meant to work together. Teams and departments may seem practical, but they may also lead to siloing, a lack of collaboration, protectionism, contradictory business goals, duplication of efforts, and an overall negative effect on employees and product users.

Another example is how success is measured. If the focus is only on short-term goals and stock prices, and not long term goals and strategy, people will behave accordingly. Quality of work and impact to the customer become less important if the behaviors that are rewarded will lead to a promotion, a pay increase, or a higher bonus.

In another example, let’s say a company decrees that one of its core cultural values is courage — i.e., challenging the status quo and standing up for what’s right. But in actuality, they don’t reward people for doing so, or don’t even acknowledge it. Especially when someone tries to challenge the people in power. You might get ignored, wrist-slapped, or even fired.

Changing culture is hard and not usually in the interest of the people in power. So what do you do? Unless you have the power, change cannot be approached in a manner that is too fast or too big. It must be gradual and bite-sized. It must be incremental rather than radical. Having this power is rare. It’s a process, and not like flipping a switch. True and valid change should be participatory, where people are involved and not kept in the dark. People’s voices must be heard. Change cannot be dictated. This is the approach I have tried to encourage in my jobs. Sometimes it’s worked, but most of the time it hasn’t, because #peopleinpower. 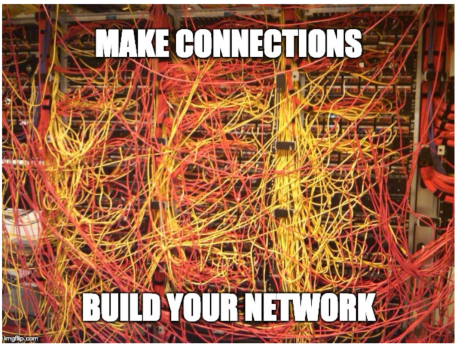 There are various approaches you can try, but basically have to play the game to (try and) change the game. You have to get political. You have to think holistically. You have to be very, very strategic. You have to obtain power, or be respected by and able to convince the people who do. One effective method might be networking with as many people across the organization as possible – building trust and rapport at all levels, and connecting with people who have power and budgets. And not just on your team or your larger group, but throughout the company, and with people with whom you may never otherwise engage. Then you will have a stronger foundation on which to try and make changes. Or, you can try to move into a position of power yourself.

Another approach is to do it on a micro scale within your own work. Don’t just do your job as it’s stated on paper. Be proactive and lead by example. Involve atypical people in your projects. Experiment with different methods of collaboration. Make uncommon requests of others when you need something, regardless of how things are typically done. Work in the way you want to work, not in the way others think you should.

Just because something is done in one way, that doesn’t mean it’s the best or most efficient way, or that it leads to the best outcomes. Sometimes people get stuck in a comfortable rut, and you can be a broken record. When you lead by example and challenge the status quo, others will start to follow. And don’t ask permission. Speak truth to power, and speak your mind. And consider the consequences of doing so. Note: if you are punished for speaking up, this is probably an indicator of the type of culture you are working in.

I have had some success here and there with small impacts to workplace culture. At one of my past jobs, I set up meetings with people who were perceived as too busy or too important by others. Lol. These were typically directors and executives. I was congratulated by several people just for making this happen, which I thought was silly, but it really was a great achievement. This says a lot about the culture I was working in when this is labeled an accomplishment. It’s actually pretty sad when the perception and reality are that people with a lot of power don’t have time or interest in speaking with the people on the ground, doing the work.

Another small accomplishment of mine was convincing my team to start using a different tool – Slack – so we could communicate more efficiently. At first my teammates were annoyed by my suggestion and reactive to the idea of using “yet another chat app”, but they quickly saw the light. You would think this isn’t a big deal, but it is when people are used to doing one thing, and don’t want to do something else. I felt very accomplished, but again, it’s such a low bar for culture change. 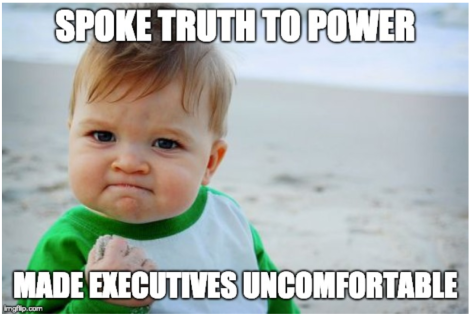 These are two small, neutral ways I have changed workplace culture. Going back to the big question of challenging power, I have found that continuously challenging those in power, and never stopping, can make small dents. I simply continue to keep asking questions, asking why, asking for more, and asking for what I want. This is where it gets hard, because it is the most difficult type of impact you can attempt to make. 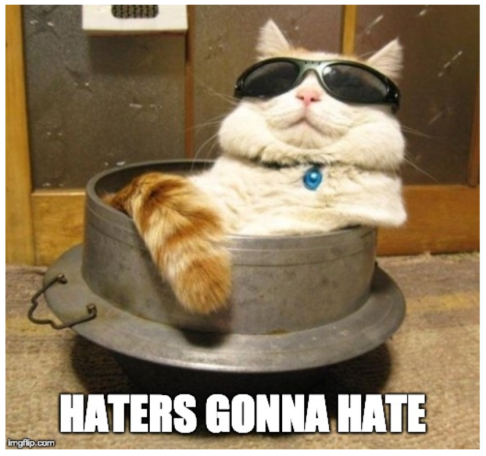 Some people have really appreciated this and that’s because they recognized the need, and because they’re cool 😁. Others have detested me for it, but their opinion doesn’t matter anyway. I have been labeled as negative, problematic, aggressive and not a team player. I have been reprimanded by executives because what I said or did bugged them. It challenged them. But I care enough about this to not just sit there, shut up and do my job. It’s not in my nature, and doesn’t reflect my anthropological upbringing. Based on my experience and talking with others, it seems there are a lot of companies that don’t want people like this as employees. Or they say they do, but that’s just lip service.

Challenging workplace culture is hard. It takes time, energy, integrity and can be frustrating and defeating. It’s sad that the bar can be so low. It’s sad when people get relegated to making small potato changes because their actual work isn’t able to move the needle. It is one of my life goals to make big sweeping changes, and I will continue to try and be strategic. But I have also realized that it’s important to include small changes as a goal, too. It’s more realistic most of the time. I have redefined success by thinking about these smaller pieces – impacting a colleague or my immediate team or a small process, versus revamping the culture of the entire company or shifting the thinking of detached executives who don’t give a damn. That’s almost an impossible goal to attain.

I care a lot that myself and my colleagues are happy, productive and don’t have to deal with bullshit. I am not willing to compromise on this value and I leave places that expect me to. I also know that when it’s too difficult to get my actual work done and make impact as a researcher, when the company culture is in the way of substantial change, I will quit that company’s culture. This is not how it should be. What is most important for anyone working within challenging cultures is to figure out what you value and care about, and find a place where you can meet those needs and thrive. And if you care to, stand up and try to make change where you can.