It’s that time of year again – spring cleaning! Last weekend I decided to tackle my garage. I put my Spotify playlist on shuffle for a couple hours while I swept up the dust and leaves, made piles of “stuff to toss” and “stuff to donate”, and organized what was left.

As part of this process, I take some time to go through boxes of old stuff that at some point I decided to keep for whatever reason (family heirlooms, childhood memorabilia, planners, photos, other sentimental items) and see if there is anything I don’t care about anymore. I like being able to whittle it down over time based on an evolving definition of “what really matters”, even if what matters gets stored in a box in the garage, out of sight and mind. Doing all of this is a very cleansing (American?) ritual and psychological release!

So here I am, going through my stuff, when I come across the last material remains from my grad school years (2009-2011). There were four big fat three-ring binders labeled with course names and numbers that contained the remains of many trees worth of paper, very neatly organized with section dividers that separated journal articles (damn I read a lot!) from essays/papers (damn I wrote a lot!). I flipped through one of the binders to see what was inside and if there was anything worth keeping. Then it hit me – I don’t really want or need any of this anymore!

Without really looking at most of it, I threw it all straight into the recycling bin (and added the binders to the Goodwill pile).

I discarded almost 22 pounds worth of information in the form of articles, papers, and other materials that had been sitting there simply taking up space. 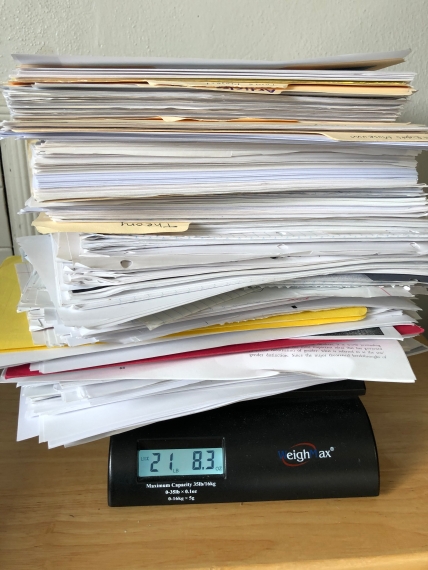 If this 22 pound pile represents four courses of material, and I finished grad school having completed 11 courses, this equates to an average of about 5.5 pounds per class, for a total of 60.5 pounds of materials that I schlepped from Memphis to Bloomington to Portland over the course of 8 years.

A list of the courses I took in grad school.

OK, I didn’t throw out all of it… but probably 99.9%. I kept a few articles on Bourdieu, embodiment, spatial mapping, and anthropological theory that I would like to eventually read in my “spare” time to reacquaint myself with the information. Whether or not I actually do this, I will eventually scan it into my Evernote to save it digitally (a different way of hoarding!) and then probably never look at again (but who knows?!)

So why did I hang onto it for so long?

First, I tend to hold onto things in general, and this is why every year I go through the process of shrinking down my belongings. For these materials specifically, I thought that I might need them for my job because of course it would come in handy! This is what I learned in school so I could get a job! So it’s all totally relevant! I should definitely keep this obscure article on social theory written by Foucault for the eventual moment in time when I will need to reference it for a project! Lol.

Thinking more deeply, I believe I was also holding onto my identity as an academic, student, and “anthropologist” in the traditional sense. Each binder, each piece of paper, each sentence down to the individual characters, represented my mastery of anthropology and dedication to my education. Each author, each book, each topic of study, was like the badges on a Girl Scout’s vest. I’ve read bell hooks! I’ve read Setha Low! I’ve read Goffman! I studied under Keri Brondo and Stan Hyland! I know about systematic racism, community development, postmodernism, neoliberalism!

I held onto this identity for years, slowly chipping away at what no longer mattered. For example, I spent countless hours studying, reading, attending classes, listening to my professors, and writing very carefully crafted essays and papers in the traditional academic sense. I participated in the rites and rituals of anthropology so that I could become an anthropologist. I did what was required so I could obtain this title and mastery. To throw away the physical results of my work, with my teacher’s written comments, is sort of like throwing away effort and time. At least that’s how I thought about it before.

Here’s another example. In my first job (2011), I was adamant about referring to myself an anthropologist until I realized that it isn’t usually helpful for communicating or working with people in business, design and technology. Names are signifiers, and “anthropologist” isn’t often clear to people. It can also imply unhelpful things like being elite or “too academic” (slow, obscure, siloed and not accessible in how you work and what you produce). Letting go of certain markers helped me shift my identity into a more appropriate title of “researcher” – with anthropology as the foundation. Times have changed since then so now it’s more acceptable to refer to yourself as an anthropologist in certain contexts. However, I continue to stick with calling myself by the actual role am playing on a team, and bring up anthropology when it makes sense.

Getting rid of the last remains of grad school is the perfect metaphor for illustrating my transition from grad school into the non-academic world, and my evolving definition of what it means to be an anthropologist and do anthropological work. I like how it got me to think about how my identity has changed over time and how it may change in the future.